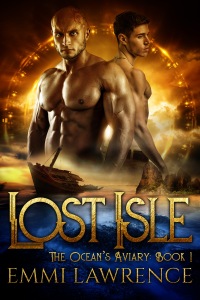 I’m ecstatic that it is complete and beautiful and out in the wide, wild world. The story does NOT end on a dreadful, horrible, no good cliffhanger, but there are hints that there is more story to come.

Firstly, I have a New Release Alert Newsletter going live tomorrow and within it is a small teaser story about the day Edwin Vlaris meets Captain Nirothe. It isn’t necessary in order to read the book, however, this will be the only way in which to read this teaser. So if you would like to read it you have only today to sign up for my newsletter!

(The New Release Alert option is exactly what it states—you will only get newsletters alerting you about publications going on sale, not about anything free I publish on my blog.)

Secondly, this is the first time that I’m publishing a paperback copy along-side of the ebook. Every previous time, the paperback has come out long after (sometimes looooong after). I’m stoked that I’ve done things the “proper” way this time around.

Which brings me to thirdly, A Giveaway! Because I actually have a physical copy to give away! :)

In order to enter:

Go ahead and drop a comment below telling me your favorite bird (or least favorite!) and why. I’ll pick a random person to be sent a signed physical copy of the book!

I’ll go first. My favorite bird is the mourning dove. I love the way they sing this haunting melody, this coo-coo-coo repetition that sparks emotional responses in me. Some runner-ups are wood thrushes, red-winged blackbirds, herons, and of course, all the magical types, like phoenixes!

And, publication day wouldn’t be the same if I didn’t do my typical list!

So here are a few interesting tidbits from the writing of Lost Isle :)

1) Lost Isle takes place in the same world as the both the Houndmaster books and the DaSunder Chronicles. The city of Awadar, where Edwin is from, is on the eastern coast of the same continent of the city of DaSunder, though the two are separated by a huge forested region, a mountain range, and, of course, part of a desert. The majority of Haunt of the Wilds takes place on the continent north of the Verdant Towers, which is where Ben was born.

2) The swiftwings in the story were brought into the world from my reading about the perytons. Peryton isn’t a widely known word (though given it just appeared in one of Seanan McGuire’s books, maybe it’ll become more known) and is a cross-breed creature made up of the front half of a stag and the back half of a bird. I renamed them into something more reader-friendly, but they are, indeed, spawned from the peryton myth. 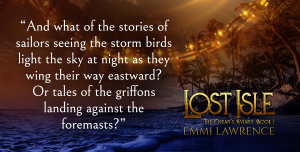 3) I couldn’t decide on my spelling of gryphon, so I have teasers with griffon and I thought about griffin, and you can see how it might be difficult to decide because they all mean the same thing, but once you pick and publish with one version YOU CAN’T GO BACK.

4) There isn’t a single woman in this entire book. Seriously. What was I thinking? I was thinking that this wasn’t going to have ANY other characters other than Edwin and Ben and that other characters wouldn’t matter. But then, all the sailors clamored in anger that they weren’t getting time and attention and suddenly I had a much larger story on my hands and yet NONE of them were women. Humph. So, the gunner on board The Torrent is a woman. And there’s a young woman in Scorched Isle who is going to also take up some wordage. Doesn’t quite make up for the egregious lack in Lost Isle, but given it’s taking place on a deserted island and all that, maybe it’s not so bad :P

5) The accents of the sailors gave me a lot of annoyance. I pulled back on how rough I had them talking so their speech is not nearly as atrocious as my first drafts, but holy crap, spellcheck HATED me XD I just ignored most of what it wanted me to do.

6) My favorite character is Edwin. I think because I found in him some of me, some of his battles with himself a little too familiar. My second favorite is Terrence. Because, honestly, without him, this story would have stopped at 30k or thereabouts and you wouldn’t have ever seen the extra 100k words.