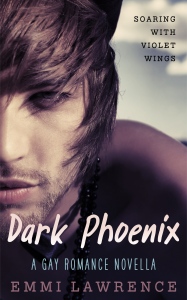 He’s spent his life in the water, never wanting to fly. Until now.

Landon’s life is simple, predictable and filled with plenty of waves to ride and bare-chested men to bring home. He doesn’t want complicated any more than he wants his neighbors stealing his stash. But when a strange man beats him to his apartment door one sunny afternoon, he discovers that sharks are not the only predators lurking beneath the ocean waves.

Along with that disturbing discovery, Landon finds himself a target for a dangerous dark phoenix named Jak, whose attention forces Landon to reevaluate whether complicated might not be so bad. Yet, every time things begin to heat up between them, Jak’s confusing disappearances make Landon want to forget ever having met the phoenix. And when Jak’s true intentions are finally revealed, the violent fallout threatens to tear them apart permanently.