GRAVE (Curtain Chasers: Book Two) has been published. It is the second novella in a gay paranormal romance trilogy. About 37k words long. Read Chapter One Here! 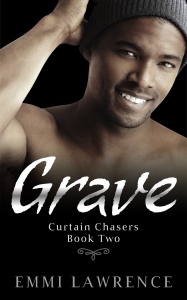 A few random facts about this novella:

1) I did not make up any of the strangely named born-agains mentioned in this story. I am, however, tweaking them to my benefit so they are more in line with my system.

2) There are less chapters, but more words, in Grave than in Alley.

3) I created a short glossary to include in Grave and only added it to Alley afterwards.

4) In my original outline, one of the small twists at the end went the opposite direction. I found that it would have made the ending a little more drawn-out and clunky so I scrapped that idea. Can’t say more without giving it away.

5) The character of Ella was created for a different novel. In that story she only exists via emails. I wanted to keep her that way for Grave, but, you know, things happen and that wouldn’t have made sense. Plus, I think she was annoyed at not having a real voice.

6) Grave has my favorite cover in the trilogy.

New chapters published every Wednesday!
Next up: Aug 26th 2020