All rights reserved. No part of this story may be used or reproduced in any manner whatsoever without permission from the author.

Edited Nov. 25, 2014: This story has been removed and below is only an excerpt. To read the entire Dark Phoenix novella you can go to the Books page for links to your preferred retailer. 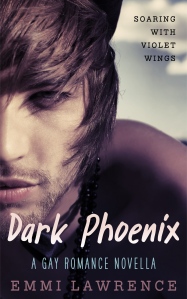 There came the sound of the fridge opening. Landon curled his hands into fists and followed Jak, stepping into the kitchen in time to see Jak straighten with a can of beer in his hand, his eyes on the label.

“I don’t care about phoenix and I don’t care about syrens. And that’s mine,” Landon said as he grabbed the can out of Jak’s hand and bent to put it back into the fridge. As he stood, he smashed his head right into the open freezer door and staggered away with a fierce curse aimed at Jak. Still rubbing his head, he turned to see Jak calmly pouring himself a half glass of vodka. “What do you think you’re doing?”

Jak reached above his head and picked up another plastic cup, then held it suspended there as he raised an eyebrow at Landon. “Want some?”

“What is wrong with you?”

“That sounds like you want some.” Jak set the cup down and poured it half full before screwing the lid on the vodka and holding it out blindly toward Landon. Then he pushed one cup down the counter in Landon’s direction and took a sip from his own.

With another curse, this one under this breath, Landon grabbed the bottle and put it away. He stood there by the fridge for a moment, watching as Jak settled himself against the counter and took another long sip from his drink, his eyes dancing with private amusement. Then Landon sighed, feeling himself give in, and grabbed the orange juice to top off his drink.

Other excerpts from Dark Phoenix are also available on the Excerpts page.