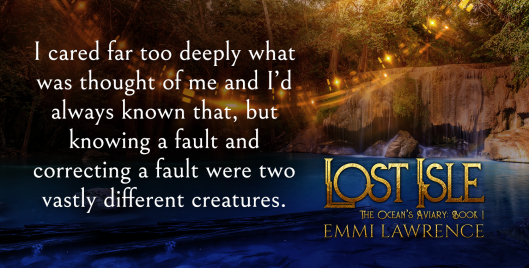 (This is a teaser for the novel Lost Isle, on pre-order now.)

The man at my door has brown hair—loose, windswept, the ends just barely curling against his forehead and neck. His face is more long than round, giving him the appearance of being lean, though his body betrays that impression with enough muscle to make him unnoticeable in the working class neighborhoods—the docks, the factories, the workshops. His hands have the most personality throughout his entire person—strong, slender hands with scribe calluses built-up on two of his fingers and ink-spot tattoos where the quill had pierced deep enough to stain.

He has the look of an indoor man. The kind who would be hunched over a desk, or a book, or a map.

I step back to let him into my office and he follows me, his eyes quick to rove and quick again to come back to me. His pants were ironed, though not the most expensive. His coat was fitted, though the loose button in the middle again betrayed his throttled funds. He stood straight with shoulders back, but not with chest puffed.

As if, by remaining straight and following the narrow, he might give the impression of a proper gentleman in order to blend and not stand out. Fighting to be average, I’d have called him. A man who did not crave attention and did not seek it. A man who would step out of the light, away from confrontation were it to peek his way.

But perhaps that is me being judgmental. After all, while first impressions are everything according to perception, they are lies tricking us into crafting a reality that person cannot possibly fight against.

“Good morning,” I said, holding my hand out.

He took it with a grip that did not tighten too hard or pull away too quickly. “Edwin Vlaris. You said you wanted to speak to me of a map.”

I gesture to the bench I had just finished clearing off before he’d knocked. “A map, yes. Please sit, Edwin.”

“Thank you.” His voice is unassuming. Shall I say, perhaps even lacking a certain confrontational ability?

“Thank you for coming.”

He sits with the air of a patient man, sinking into the cushions and looking at me as if expecting to be here for a good long while. His eyes again drag away and this time I realize he’s examining the bookshelves behind me. Or perhaps the books themselves.

“Before we get to the map, I was wondering something else. I heard tell that you’ve been searching for information about the sea. In particular, about birds and beasts others don’t think exist.” I busy myself with picking at the notebook debris from ripping out pages.

Edwin is focused on me now, the tiniest pinching of his lips giving away his concern. His response is careful, measured. “I have been searching for stories. Ones about The Flightless, with its great aviary. I’m aware most think it a myth,” he says with the sense of one who had been mocked often in the last few months.

“What if it’s not, though?” I lean forward on my high-backed stool. “What if the stories are real?”

“All stories are steeped in reality in some way,” he hedges.

“But what about these ones. About magical birds that can spit fire, breathe ice, or grow islands in its wake?”

He cleared his throat. “Firstly, wherever you’ve been getting your information has been misinformed. There are no birds that can spit fire or breathe ice. And I don’t think any bird has the power to raise an island from the sea.”

I looked at my notes in disappointment.

“But there are other stories. If you have the time, I could share what I’ve learned. Unless you’d rather speak about the map you’d wanted to commission.”

“Oh, it’s not as if I’m going anywhere. Not any time soon. The map can wait.”

Yes, the map could wait.

I’ve done a few interviews before, and after writing this one, I went back and checked. Yep, Edwin Vlaris is the only one not to leave. The only one not bored or irritated or busy enough to leave me as soon as possible. The only one who is obviously going to stick around for hours.

I love him a little more for that. Kindred spirit. Wanting to wax on about the fables of his world, the ones I have created for him especially to discover.

This snippet is a teaser for the fantasy adventure romance book, Lost Isle (The Ocean’s Aviary Book I), on pre-order now.